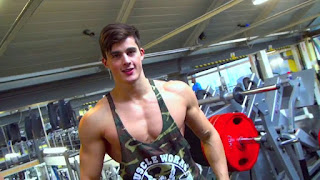 He's called "the world's hottest math teacher". Pietro Boselli, born March 12, 1988, in Negrar, Italy, is an international fashion model who was discovered at the age of six by a local scout and began modelling for Armani Junior. He later went on to study mechanical engineering at University College London, graduating with a first class Bachelor of Engineering degree in 2010. In the same year he started his Doctor of Philosophy candidature.

During his PhD candidature, he taught undergraduate mathematics to mechanical engineering students. In January 2014, a student took note of his physique and stumbled upon his modelling career; the subsequent Facebook post went viral a year later. After the viral post, Pietro signed with the British modelling agency Models 1. He has been seen in American modelling campaigns for clothing retailer Abercrombie & Fitch and fitness club Equinox. Pietro has also appeared in spreads for Chinese magazine GQ Style and was featured on the cover of Attitude. Moreover, he is WBFF European Fitness Model Champion in the Tall Class. He completed his PhD study in February 2016. Pietro Boselli stands 6'1 at 185 lbs.

Here is what Pietro had to share with Attitude magazine:

On going viral: "I have different students each year and one of them usually finds out I do modelling on the side and so posts and fan pages can sometimes surface online. In this case, though, it happened overnight. It’s been absolutely crazy and a little bit strange."

On helping shatter stereotypes of male models: "I think this is the reason there was interest, because of the stereotypes. Male models are assumed to have no brains. On the other hand then professors are viewed as old and, for lack of a better word, ugly. I guess that I do both has helped to somewhat change people’s perspective."

On reactions from people in his academic world: "There have been mixed reactions. My colleagues are very amused by it and sometimes tease. Modeling has sometimes gotten in the way of my academic career, especially earlier on. I remember initially trying to hide it because I was afraid of condescension, but I’ve learned that modelling is part of who I am and I shouldn’t be ashamed of it, even in an academic environment."
Source: www.justjared.com, http://attitude.co.uk

In this video Pietro teams up with Diego Sechi to work shoulders. Diego is a 22 year old WBFF European Fitness champion in the Short Class, and a former international Greco-Roman Wrestling Champion.

In the second part of their workout challenge, the two WBFF fitness champions Pietro Boselli and Diego Sechi train back.

In this video Pietro explains his diet and and talks about a healthy nutrition for fitness athletes.

Stills from the videos:

In this video Pietro poses for the camera, and talks modeling and his work at University.