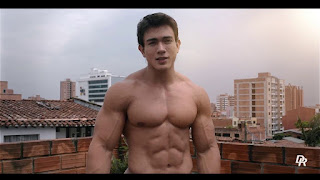 Three intense exercises for stone-hard washboard abs: Young bodybuilder Daniel Roman shows that there is far more than sit-ups. He demonstrates crunches on a stability ball, and two more special exercises. Even though he is not talking in English in this video, you can follow his performance easily.

Stills from the video:

In this video Daniel Roman demonstrates his chest routine: